Well, it all started when I wanted – no, needed – to install Adblock Plus in Chrome on my old Lubuntu 11 virtual machine. Ah, Adblock won’t install on a Chrome that old. Ah, Chrome won’t upgrade on an OS that old ! Oh well, time to try the latest Lubuntu 14.04. No VMWare image was available and I need VMTools so as to move data twixt Lubuntu and the Windows Host. [Cracks knuckles] OK, time to get busy and make a new image.

I’ve made a few virtual machines in the past and installing the tools was usually easy. But VMWare player being older than Lubuntu, plus Lubuntu missing some components (hey, its a lightweight Linux so that’s OK … and it’s why I’m using it), oh and finding out how to get the whole thing to auto start turned out to be the most time consuming (if ultimately the most simple) part of the exercise.

Creating The Base Image

First things first. I’m going to assume you have VMWare player already installed – else you wouldn’t be reading this far (unless you are real bored). So the first step is to download the latest Lubuntu ISO from:

Navigate to and select the ISO you downloaded (mine was lubuntu-14.04-desktop-i386.iso). Note you’ll get a warning that VMWare doesn’t recognise it, but that’s only to be expected: 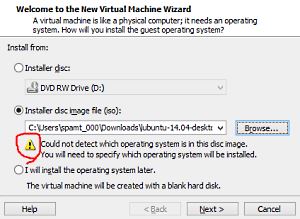 On to the [Next>] wizard page. 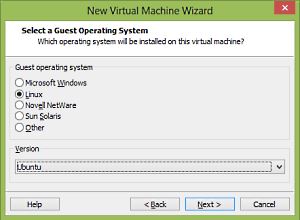 – and set the ‘Version’ to ‘Ubuntu’ (since Lubuntu is a reduced Ubuntu).

On the [Next>] page you give the image a name and specify a location for it – make sure you create a new folder unless you want all the virtual machine files to get mixed up with existing directory contents (been there, done that, swore profusely!).

On the [Next>] page – ‘Specify Disk Capacity’ – simply leave the default settings and hit the – you guessed it – [Next>] button, then finally press the [Finish] button.

That was quick – but so far we’ve just created an image of something that can create a Lubuntu installation, not actually installed. So, now it is time to run it. Press the “Play virtual machine” icon (green triangle). Fairly quickly you’ll be presented with a text screen to select language, with a seconds counter ticking down - select your language and press the [Enter] key before the timer elapses, otherwise the Lubuntu will boot into a trial mode and not a proper install.

On the next screen, select ‘Install Lubuntu’ (remember, there is no GUI just yet so you have to resort to ye olde arrow keys for selection) and press [Enter].

We are now in the Lubuntu installer and the first page is … er … select your language again, though admittedly its a lot prettier than the previous time Select language and press the [Continue] button, using the mouse since we now have a GUI :-).

On the next page accept the defaults just accept the defaults and press [Continue]. That includes leaving ‘Download updates while installing’ unchecked, hey you can do it later when you have time to find what the update breaks (or am I just confusing Linux with Windows :-) ).

Press [Continue], on the next page select ‘Erase disk and install Lubuntu’ and press the [Install Now] button – don’t panic, its installing on a virtual VMWare drive.

The next page is to select your location which I’m sure you’ll manage. 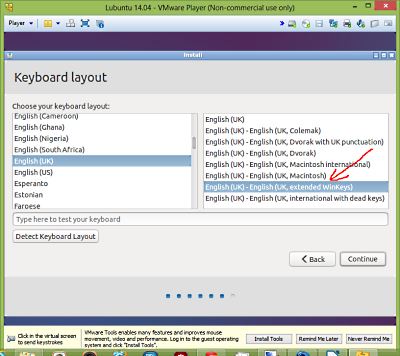 The page that follows that is Keyboard layout, I selected English (UK) on the left but, importantly, UK extended WinKeys on the right panel as if you don’t funny things may happen such as the ["] and [@] keys getting reversed !

At this point you’ve probably noticed that VMWare is nagging us to insert tools. Don’t worry about that, we’ll be doing it later.On the next page, enter your name, user name and password but do not try to modify the ‘Your computer name’ – there appears to be a bug where if you modify it you get an error stating that it is already in use ! On pressing the [Continue] button Lubuntu will now start installing itself. Time for a quick – and it will be a quick – cuppa. When installation completes press the [Restart Now] button, like I knew you would.

Ah, is that it, a warning message and it just sits there? Checking in task manager reveals no activity in VMware player so I guess it really has stopped but VMware player hasn’t realised. Not to worry, select the player’s menu [Player] -> [Power] -> [Power Off] and press [Yes] when the warning prompt appears,

We should now have a fully working Lubuntu image (without the VMWare tools). However the image still seems to think it is connected to a “CD drive” that is, in reality, the original ISO file that we downloaded. This will prevent us from installing VMware tools (which is done via another virtual CD), so best thing to do right now is to rename the original ISO file before launching the new Lubuntu image. 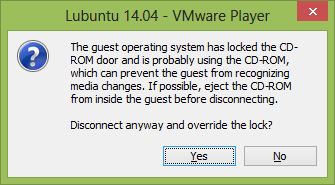 You will be prompted that the CD drive is locked. No worries, just press the [Yes] button. Note: If you didn’t rename the iso file like I told you earlier then this will fail! 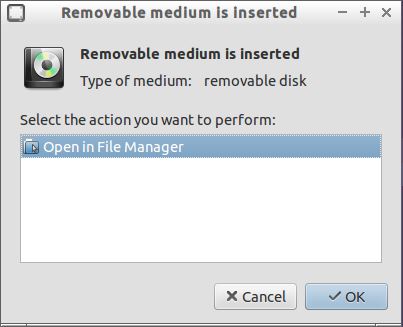 Select “open in file Manager” and press [OK]. A browser window will appear with a ‘manifest.txt’ file and a compressed ‘tar.gz’ file for VMWareTool (the exact file name may be different depending on your VMware player version). Now bring up a second file browser dialog – an ‘Explorer’ window if you are a Windows Weenie like me

– using the icon towards the bottom left of the window (next to the main menu button – again, the ‘Start’ button if you are a Windows Weenie). This will open a window at your home folder. We now need to decompress the “tar.gz” file and move it (temporarily) into your home folder.

Double-click on the “.tar.gz” file so as to open its contents in the Archive manager, select the one and only folder it contains (vmware-tools-distrib) and drag it into your home folder.

Now for the fun. We need to open a terminal window. The secret magic is to press the [CTRL]+[ALT]+T keys (hey, menus are for Windows Weenies and besides there doesn’t appear to be one in a number of later Linux distros menus).

The  (damnit!) terminal window should open in your home directory. Type “ls” to view the contents, amongst which should be the ‘vmware-tools-distrib’. Type in “cd vmware-tools-distrib” and type “ls” again. You will notice a file there called vmware-install.pl and we want to run it. Snag is, it won’t work just yet as the Lubuntu image is a stripped down image and is missing some pre-requisits we will be needing, such as the GNU ‘C’ compiler (GCC).

In fact we need to install three pre-requisits:

The first two are easy. Type “sudo apt-get install gcc”, type in your password and confirm you want to install it and watch it install gcc. For an encore, repeat it but using “sudo apt-get install make”. If only step 3 were that easy – in fact it may well be *if* you knew what to install. But I didn’t. I only worked it out by running the vmware tools installer, noting the error message and doing a major internet search. Through sheer determination and just a little bit of luck I stumbled across this:

The Lubuntu image at least has Firefox installed so use that to click on the link and open the file in Archive Manager. The downloaded file contains a single item, a folder called ‘meta-source’. Drag that folder into your home folder.

Finally we are ready to install the VMware tools.

Return to your  terminal window which whould be in the ‘vmware-tools-distrib’ directory (where we left it), and type “sudo ./vmware-install.pl”. You will now be bombarded with questions to which we will always selecting the default – just pressing the return key. BUT DON’T GO TOO FAST! When you get to “Before running VMWare Tools for the first time…”, select the default (i.e. press [Enter]) but now we just need to keep a watch out.

When you get to the VMWare Host-Guest Filesystem allows for shared files …”, press [enter] and ensure that you are prompted “The path “/usr/bin/gcc/” appears to be a valid path to the gcc binary”. Good, it found the GCC we installed, just press [Enter]. Similarly the kernal headers we downloaded should be correctly detected so just press [Enter]. Like I said, we will only be selecting defaults for everything (just pressing [Enter] every time) but its worth checking that our installed components are correctly identified. Just continue through to the end selecting default options. Et voila !? 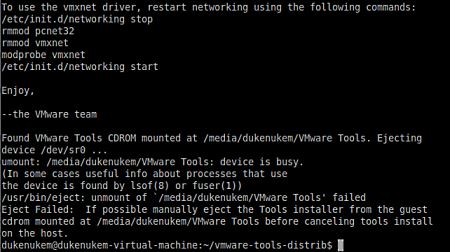 You know, this Lubuntu 14 / VMware player combination does seem to have a bit of an issue with the CDROM drive ! Anyhow, I think we’ve installed VMWare tools. Lets try it out; on the (Windows?) host machine open an explorer window and navigate to some directory you can dump random files into. Now in the VMware player, go to one of the file manager windows, find a file – any file will do, for example one in the ‘meta-source/debian’ folder as they’re nice and small – and attempt to drag the file from the Lubuntu “machine” into the (Windows?) explorer window. It no worky! All that effort and it doesn’t work.

Panic not, go back to your terminal window and type “vmware-user” – nothing appears to happen other than a brief frenzy of activity from the hard drive. Now try and drag again, it works ! At least, it works until you restart the virtual machine, when you’ll need to open a  D’oh! terminal window and type “vmware-user” again. If only we could run it at startup …

Running The Tools at Startup

Fancy a laugh ? Go on, open your browser of choice and search for how to run an app at startup. I lost count of the number of (non-existent) config files and (non-existent) GUI menus that exist across the different Linux distros. However, by chance I stumbled across a similarly frustrated chap on the ubuntu forums whose thread contained nothing but six posts by him (with no responses) but he’d finally found it! 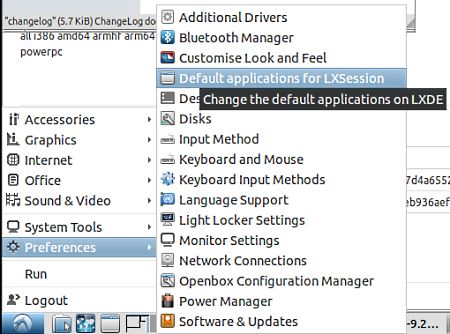 Click the Lubuntu [start] button (what is the right name for it?), select [Preferences] and then select [Default applications for LXSession]. Once it has loaded it’s database, select the “Autostart” tab. Ooo look, there is VMWare User Agent ticked. Dunno what it is but clearly it’s not the VMware tools we wanted so lets add it. Type in “vmware-user” in the box just to the right of the [+Add] button and then press (bet you are ahead of me here) the [+Add] button.The session configuration should now look something like this: 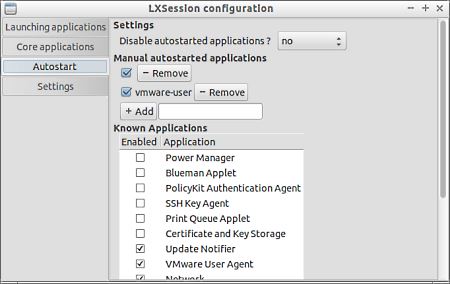 Close all those Lubuntu windows and shutdown Lubuntu, which should now shut down cleanly.

Now re-run the Lubuntu virtual machine. After logging in, maximise the VMWare player window using the [CTRL]+[ALT]+[Enter], or if it started up already maximised use the key combination twice. The lubuntu window should resize itself to match. Now open a File Manager window and check that you can drag files from that file manager into a file manager in the host operating system.

Time for another well-deserved cuppa!