Previously, in parts 1, 2 and 3, we’ve shown how to get to the stage where you can basically play and pause a media file using VLC, displaying the video on a panel on your own form. However, we need to do more:

The answer to this seems to be in hooking into the VLC events, specifically those to do with playback. Hope you are paying attention, this is a little more involved.

It all starts off simple enough; just like creating a session handle, a media handle or a player handle, we have a function to get a a handle to VLC’s event generator:-

(To be confirmed : although I’ve indicated that a handle to a player – hPlayer – is passed, I think various handles can be passed depending upon the type of object for which we are trying to get events).

There are maybe a hundred or so possible events, but for a player only the following seem to be relevant: 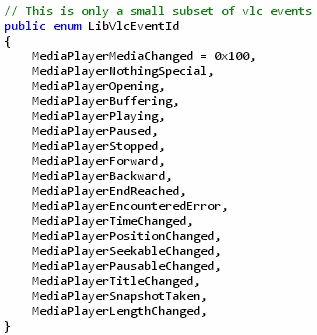 We specify which events we are interested in by taking the VLC event handle and using the following functions:

Wait a moment .. whats this “hCallback”? Well, that’s the way we specify what function we want to be called back when an event occurs.

Well, first we need to define a delegate that describes a function we will be implementing in C# land to receive the callbacks: 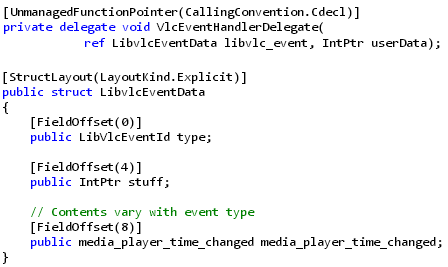 If we now go back to our form on which we are playing the media, we implement a function that matches the delegate:

We also hook up VLC to call this function for every player related event:

[IMPORTANT: The first line shows hEvent stored locally. This is just for illustration; you must store this at the class level otherwise when it goes out of scope .NET’ll clean it up !]

Note the use of Marshal.GetFunctionPointerForDelegate(), passing in the function we want to be called back and in return we get an IntPtr whichis the “hCallback” we need for the libvlc_event_attach and libvlc_event_detach calls.

Anyhow, you should now have a function that is called each time there is a player-related event.

Before you dive in to intercepting these events and using them, remember nothing is ever as simple as it seems; For example, when you get the “MediaPlayerLengthChanged” event you might be think that the VLC function you can use to read the media length can be called. Bazinga !!! No, we need to look at the events a little more closely.

Now for an admission; I’m not entirely convinced about what happens; for example attempting to open a piece of media might actually kick off a thread and querying things about the media can only succeed when that thread gets to a certain point. In my test, that point seems to coincide with the MediaPlayerPositionChanged event, however I can not guarentee this. There is no documentation to help us here, this is a purely empirical result.

Well, that’s about it really, all you need to embed VLC on your own winform, how to load Win32 DLL’s in .NET and link up the functions. Have fun and remember, I found parts of this empirically, there may well be better functions available.